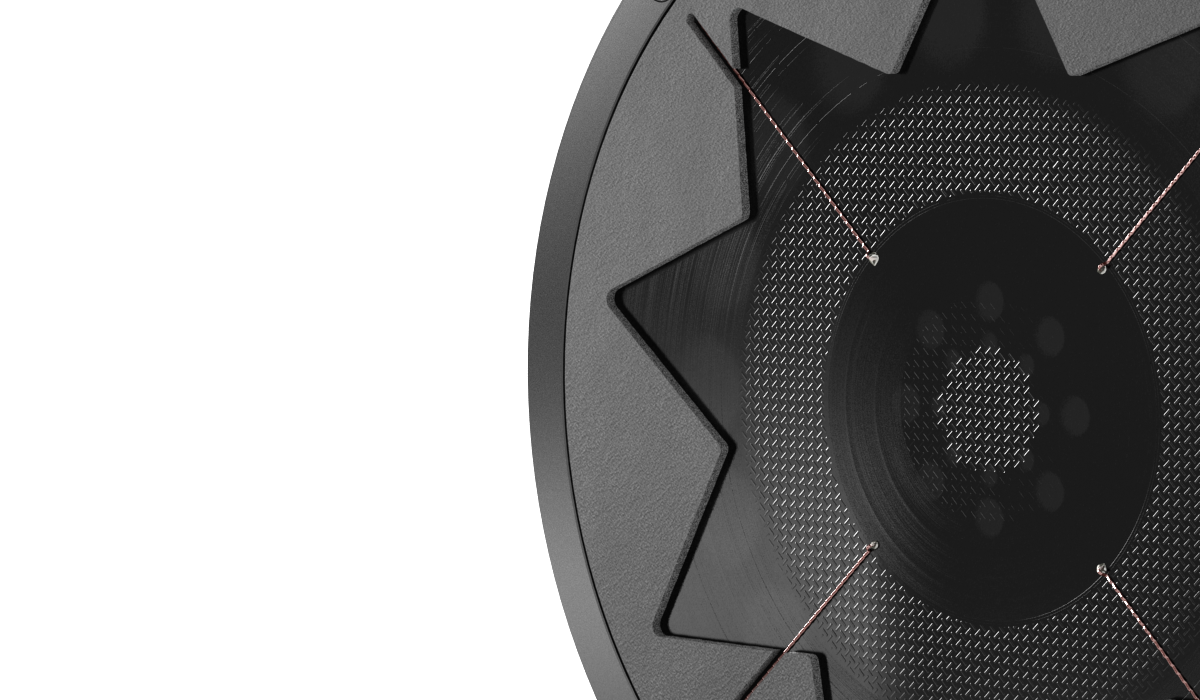 The heart of our systems
- Tech talk

Almost 40 years were spent in systematically searching, testing, researching and rejecting until the vision of the natural resonance-free radiation principle became an acoustic reality.

This has resulted not only in one of the most elegant appearances in the loudspeaker market, but also in a masterpiece of precision mechanics. The decisive factor in the MANGER® sound transducer was the logical turning away from the more than 90 year-old transducer principle used in conventional loudspeakers, therefore doing without the piston-like movements with their faulty reciprocal overshooting. 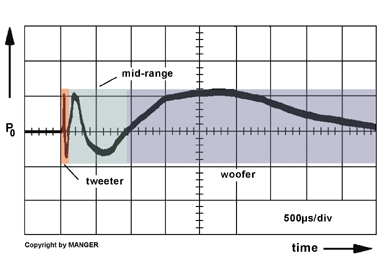 A well-known typical 3-way speaker. Clearly to be seen the time-displaced displacements and transient errors of tweeter, mid-range and woofer. This speaker has been designed exclusively for a smooth frequency response.

Instead, Josef W. Manger relied on the principle of bending waves, which starting from the centre of a plate-like diaphragm, travel to the outside, like waves after a stone is thrown into the water. The rigidity of this thin flexible panel decreases from the centre to the outside at an equal ratio, very similarly to the basilar membrane in our ear. High frequencies quickly run out in the inner area of the membrane, whereas long waves (low frequencies) concentrically reach right to the edge at the star-shaped damper. There they are absorbed so that no reflections can come from the edge.

Cross-section through the Manger sound transducer with the complex and precisely tuned functional elements. The manufacturing process demands tolerances of as close as an eight-thousandth of a millimetre (0.008 mm). Seen above the diaphragm is the stylized wave movement of the diaphragm in the range between low and high frequencies.

In this way the MANGER® sound transducer controls the complete frequency range from 80 Hz to 40000 Hz on its surface and is at the same time close to the ideal of the point sound source. The conventional splitting into several ways (tweeter, mid-range and woofer) for different frequency ranges is therefore avoided. The active surface of the 19 cm diameter flexible diaphragm becomes smaller as the frequency increases so that the effective surface is always kept small in comparison to the wavelength to be radiated. 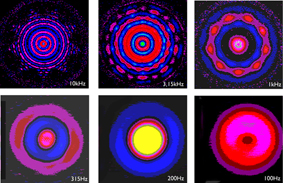 The images made with laser Doppler vibrometrics show the concentric wave movement of the bending wave diaphragm at various frequencies.

That the MANGER® sound transducer in spite of its large frequency range of between 80 Hz and 40 kHz and its sensitivity of 91 dB 1W/1m can achieve the tremendously fast rise time of 13 µs is attributable to many design finesses:

In the woofer range large displacements are necessary, which would lead to a long and therefore heavy moving coil. These in turn would be much too slow for fast movements with their mass. The solution is both simple and clever, but nevertheless producible only under the most difficult conditions:
Two voice coils, mounted mechanically in series and switched electrically in parallel, using aluminium wire on an aluminium backing and copper strip leads, produce the solution of an overall long, but nevertheless extremely light driving coil. This is unique for a wide-band transducer in spite of a possible displacement of ± 3,5 mm and a total weight of only 0.4 grams. A further advantage of this design is the drastic reduction in non-linearities, which are common with larger displacements. In addition this arrangement of a double voice coil, for which Manger received a patent as far back as 1968, considerably suppresses the natural resonance.

No less than 15 neodymium magnets concentrating their extremely strong magnetic field of 1.32 Tesla on an air gap of only 0.95 mm width, in which the lightweight 70 mm diameter coil moves, supply the drive for the diaphragm and are responsible for the fast rise time and the high sensitivity of 91 dB, 1W/1m.

Not rigid as in conventional piston speakers, this flexible diaphragm represents a frequency-independent impedance for the driving force. Or to put it more simply, it behaves like an ohmic resistance in a power circuit. Neither leading nor lagging forces are stored, i.e. neither potential energy (spring/capacity) nor kinetic energy (mass/inductance). These stored forces also lead to the transient errors or also transient noises described above in the commonest piston loudspeakers (each electrodynamic dome tweeter is, for example, such a piston loudspeaker).
The inventors of the electrodynamic piston loudspeaker, Rice and Kellogg, described around 90 years ago that "the membrane with ideal resistance in contrast to the mass-spring type is the only one where the exerted electrodynamic force is directly proportional to the desired diaphragm speed."

And this is exactly the type of diaphragm with an ideal resistance used in the Manger sound transducer.

When Prof. Dr.Ing. Manfred Heckl (†), Chair of Engineering Acoustics at the Technical University of Berlin was asked around 35 years ago to examine the theory of the MANGER® sound transducer, he was initially sceptical of this new sound radiation principle using a flexible plate as the diaphragm.
Prof. Dr.Ing. Manfred Heckl was even during his lifetime an internationally respected and eminent authority in the field of acoustics/structure-borne sound. His book "Structure Borne Sound" is a standard text in physical acoustics known throughout the world. Prof. Dr.Ing. Heckl wrote in 1978:

»Dear Mr. Manger,
In order to ease my guilty conscience somewhat, I spent last weekend looking at the theory of your loudspeakers. To my surprise it turned out that the radiation principle selected by you, at least in the idealization I investigated, produces a radiation in line with the current at all times; i.e. transient noises and similarly annoying effects do not occur....«

(the complete proof can be read here)

Since 1978 the MANGER® sound transducer has been the pinnacle in theory, poised to conquer the world of high-end audio in a practical application – loudspeakers. For anyone who enjoys listening to music, the advantage is quite evident: a perfect impulse behavior without any transient errors, whatsoever! The incoming signal is converted directly into sound. Initial transients from vocals and instruments are reproduced with absolute dead-on precision… an all-important prerequisite for our sense of hearing to recognize and localize the different musical sounds in a given space.

And there’s more… due to the total absence of transient noise, the MANGER® sound transducer cannot be heard nor localized, as can all conventional loudspeaker drivers. Whether listening to music for pure enjoyment or in a professional recording studio, listen for hour after hour after hour – never suffering from that dreaded side effect, "listening fatigue.”

The list of benefits and advantages continues… toss out the notion of having to sit in the "sweet spot” (center) in order to enjoy stereo imagining. With the outstanding dispersion qualities of the MANGER® sound transducer, multiple listeners can enjoy listening to music – at the same time – and, yet, stereo imaging and balance remain in tack.

Specifications of the MANGER® Sound Transducer: